There are usually several groups of people, called , that are interested in the management of a coastal area. They often have different needs, ideas and expectations.

This is because there are many uses for coastal areas. Some parties will want to use the land for tourism or industry, whereas others might want to develop the fishing industry, fence the area off as a gunnery range or nature reserve, or perhaps use it as a transport route. This often means that there will be disagreements between the groups and that if one group is happy, another is not. Afterall, if the group wanting to fence the area off as a Navy gunnery range succeed in their aims, the tourists wont be allowed on the beaches, and fishing boats will be excluded from the area.

Groups that are typically involved in coastal management issues include:

Local Residents: The people who live along the coast are often most concerned about protecting their property from coastal erosion. They want reassurance that their homes, gardens, businesses and land will not be destroyed by the sea. At the same time they often want coastal management to look attractive and not cost too much. They may be retired people wanting the area to remain unspoilt and natural, or working people needing better communications, more homes, fishing ports etc.

Environmental Groups: A good example might be the UK group “Surfers Against Sewage” who campaign for clean beaches with no ‘floaters’ as they are called in Cornwall. Other groups could include the National Trust, and local groups set up to run reserves or to protect local features.

Local Councils: These often get involved with all the interested parties, making decisions and offering advice. They also have their own responsibilities such as coastal defence and promoting local business.

National Governments: The national government may be represented by an organisation like the Army, a department responsible for fishing, housing, nature preservation etc. In many countries the government also owns much of the coastline and takes an active interest in its development.

Visit England (Tourist Boards): These tend to want two opposite goals – a beautiful unspoilt coastline, and lots of tourist attractions. These can exist alongside each other but on other occasions it can be impossible to have both. For example, a wild coastline can have a well-managed National Park that attracts tourists, but it will also need large roads, carparks, sewage and refuse services.

These groups sometimes agree with each other but often have conflicting aims.

Chichester Harbour, on the South coast of the UK, is a popular venue for tourists, sailers, swimmers, walkers and nature lovers.

Numerous small boats racing across the estuary are not good new for the swimmers or the fishers. The nature reserves need to protect the habitat and wildlife, but the tourists and walkers want to have access to the unspoilt reserves.  Boats need space without swimmers, swimmers need space without sailing boats, tourist shops need people but the wildlife in the nature reserves doesnt like people; there are plenty of conflicts on how to manage the land. 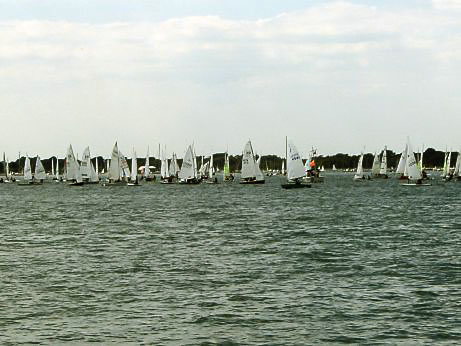 This is Seaton beach, in Cornwall, UK. The photograph was taken in the summer and shows the sandy beach being used by tourists. There is housing and a hotel at the top of the beach, and a road running down the side of the hill towards the beach.

There are several different interested parties involved in managing this stretch of coastline. The locals who live there want both an income from the tourists but also peace and quiet. The local council has to clean up after the tourists, but also finds the money they spend useful. The local water company must test the river water every week to ensure that it is safe for the tourists and for the wildlife in the adjacent nature area. Visiting tourists want places to stay , easy access to the beach and safe sand for their children.

Just round the corner is a section of coastline that is out of bounds to tourusts and locals alike. It is used by the Royal Navy for gunnery practice and the beach may contain live bombs and shells!